Tea: What it is and isn’t 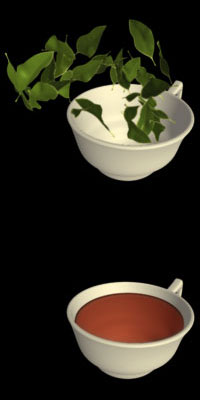 Among the world’s most popular beverages, tea is second only to water—and plays an important role in almost every culture. This ubiquitous beverage is consumed in the morning, afternoon, or evening, whether you’re feeling great or a bit under the weather, and can be enjoyed hot or cold. As a bonus, tea promotes a healthy lifestyle: it’s rich in antioxidants, can shield our immune systems, stop infection, and even help with weight control.

Camellia sinensis is the scientific classification for the tea plant. Camellia is native to most of Southeast Asia, but is cultivated throughout the world in countries such as Japan and India. It also grows in some areas of the United States and South America. China is the birthplace of tea and produces some of the finest varieties of white and green teas available.

Many beverages are called tea that really shouldn’t be. Drinks made from spices and herbs are called Tisanes, and should not be confused or lumped in with true tea. If a beverage is not made from the leaves of the Camellia sinensis plant, it is not tea; it’s a wannabe.

Although hundreds of varieties of tea are available, only three main types of tea exist:

All three tea types come from the same species of plant. After that, all bets are off.

Black tea
Black tea is the most commonly consumed tea in the world, and it is the most processed. Mostly brewed in tea bags in America and traditionally served in the United Kingdom as “afternoon tea,” this type is found in most tea drinkers’ daily cup.
Oolong tea
Oolong (also called wu long) falls between black and green tea, and consists of large leaves. This category is not indigenous to a particular region, but is produced mainly in China or on the island of Taiwan. Oolong teas are the most difficult of the three types of tea to process because leaves are only partially oxidized during processing. For more on oxidation, see Tea Processing
Green tea
Grown and often enjoyed in both China and Japan, green tea branches off into literally hundreds of varieties. However, only three overall categories of green tea exist: pan-fired, sencha and white tea. Japan used to be the main producer of sencha tea, but its popularity has led other regions to produce it. Similarly, the processing of white tea originated in the Fujian province of China under stringent quality guidelines, but that’s no longer the case.

Processing is generally considered the art of tea, where many of the subtleties in taste, body, and overall character are created. Much like human veins contain blood, tea leaves have enzymes flowing through their veins. When the leaf is broken, bruised, or crushed, these enzymes are exposed to air, resulting in oxidation. How much of the enzymes are exposed and for how long determines the amount of oxidation that occurs, which, in turn, creates the unique qualities of that tea.

The following describes the basic steps in the production of black tea. The differences in oolong, green and white tea processing are noted. The production methods used depend on the ‘cup of tea’ of the markets to which the factories sell.

Left unattended, the tea plant can grow into trees 30-feet tall. But, for the purposes of harvesting tea, plants are pruned into bushes approximately three feet tall. Harvesting or “plucking” is achieved by picking only new shoots from the tea bush. These new shoots are called a flush. Ideally, each plucked shoot consists of two leaves and a bud. However, coarser pluckings may have as many as five leaves and a bud. A finer plucking yields a higher quality tea. White tea (ideally) is the finest of plucking, sometimes including only the bud of the leaf.

When received at the manufacturing facility, tea leaves are laid out evenly on ventilated bins at a uniform depth of about 12-18 inches. Ambient air circulates through the leaves, typically for three and one-half hours, reducing their moisture content by about half, making the leaves soft, pliable and ready for processing.

The soft leaves are then processed through a series of machines designed to break and tear the plant cells, exposing the remaining cell moisture to the air, which starts a chemical process, which, is in effect oxidation. Compare it to what happens when you cut an apple and leave it out unrefrigerated. Two primary types of manufacturing are used to process leaves – orthodox and CTC (Cut, Tear and Curl). Both are discussed further in the Leaf Size section.

The ground leaves are laid out on conveyor beds to a depth of about six to eight inches and allowed to oxidize, typically for one to two hours. During oxidation, the color of the ground leaf changes from green to light brown, and its aroma from that of cut grass to fruit. Oolong teas are only partially oxidized during processing, by tossing them into baskets to bruise their edges. Oolong leaves are then steamed to stop oxidation. With green tea, dry heat or steam is applied immediately after withering to stop oxidation.

Just as many types of tea exist, the types of ovens used to dry tea and stop oxidation vary greatly. Tea may be placed in a wok-like pan and heated over hot coals while swirling constantly, or it may be run through continuous-flow dryer beds in thirty-foot long ovens. After drying, the leaves go through sorting and packing, which are discussed on the Leaf Sizes page.

Whether black, oolong or green, there are hundreds of different tea leaf sizes and shapes. Large leaf sizes command a high price in the market, as it is difficult to maintain the leaf shape through the many manufacturing stages.

Although infinite variations may exist, two primary types of manufacturing are used to process leaves – orthodox and CTC.

Orthodox leaf results from a rolling process (there’s more than one, of course) that twists the leaves. Higher value is placed on larger ‘leaf’ grades, which are sold loose for brewing primarily as a hot beverage. During orthodox processing, quantities of leaf are broken into varying sizes, from 1/4 to 1/8 inch to powder.

CTC (an acronym for Cut Tear and Curl) involves more of a grinding process. CTC processing makes a much smaller, uniformly sized product. The leaf is denser than orthodox production, yielding a more intense flavor and beverage color.

Once processed, leaves are sorted by passing over a series of sieves, separating them into various sizes. The leaf progressively gets smaller in the “broken” grades, on to the fannings and dust, which are used in tea bags.

After sorting, the bulk tea is packed into containers. Corrugated boxes and plywood chests are still used on occasion, but in the last twenty years, the industry standard has become paper sacks. The final packing weight depends on the leaf size and density. Sacks are then placed 18-20 to a pallet, stretch-wrapped and containerized – twenty pallets to a forty-foot container – and shipped to the final destination.

Various types of tea take their inherent taste and appearance characteristics from the regions in which they are grown. But what really sets the three types of tea apart is the amount of leaf oxidation that occurs during processing.

Many varieties of black tea are produced around the world, so black tea characteristics vary. Some examples include:

Assam tea.
Grown in the Assam Valley of India (said to be the birthplace of Indian tea). Three flushes of Assam tea are produced, each having its own unique characteristics. Assam tea can be malty, as well as sweet and smooth.
Darjeeling tea.
Grown in the foothills of the Himalayan Mountains in India. Darjeeling teas are full-bodied with a delicate muscatel taste and pleasant aroma.
Ceylon teas. Grown throughout Sri Lanka. The altitude at which the teas are grown affects the taste of the finished product, which can range to malty with floral notes to full-bodied and flavorful.
China black teas.
China black teas include Keemum, Yunnan and others, including scented black teas. Keemum has a rich aroma and complex, wine-like taste, while Yunnan has a full-bodied taste with a subtle sweetness.

The color and taste profiles of Oolong teas can vary greatly, depending upon the extent that the product is oxidized. Taste and aroma can vary from extremely delicate, fruity and nutty, to sweet, floral and woody.

Because processing methods vary depending on the category of green tea being produced, green tea’s traits also vary widely. (Surprised? We didn’t think so.)